The London Karate Club shares a proud and direct lineage with the most important figures and events in karate history.

1477 The three kingdoms of Okinawa are unified, and the ruler King Shosh bans the use of weapons all of Okinawa. Development of unarmed combat increases.

1881 Higaonna Kanryō returned from China, where he studied under Master Ryu Ryu Ko, and founded Naha-te, the precursor to karate.

1916 Grand Master Higaonna Kanryo dies with student Chogun Miyagi at his side.

1952 Sensei Meitoku Yagi becomes the only student of Master Chojun Miyagi to be given permission to open a dojo.

Class Bow in and out Ceremony

Sensei will say the following:

Students may say after each Senior student command:

Sensei will say the following:

Students may say after each Senior student command:

Arigato Gozamashita – Thank you for teaching me, helping me

London Karate Club places significant emphasis on kata as a critical training element. Kata is the essence of karate and represents more than a millennium of learning and teaching.

There are twelve Goju Ryu kata:

Sanchin means “three battles.” Sanchin is a kata meant to unify the mind, body and spirit. The techniques are performed very slowly so students master precise movements, breathing, stance/posture, internal strength, and stability of both mind and body. Sanchin is the foundation for all other kata, and is generally considered to be the most important kata to master.

Gekisai Dai Ichi & Ni means “attack and destroy.” Gekisai Ichi & Ni were created around 1940 by Chojun Miyagi and Nagamine Shoshin, and were intended as beginners’ kata to introduce the basic forms of karate in a standardized way. The main difference between dai ichi and dai ni is that dai ni introduces open handed techniques and new stances (i.e., neko ashi dachi).

Saifa means “smash and tear.” Saifa has its origins in China and was brought to Okinawa by Kensei Higaonna Kanryo. It contains quick whipping motions, hammerfists, and back fist strikes; it particularly emphasizes moving off-line from an opponent’s main force, while simultaneously closing distance and exploding through them.

Tensho means “revolving hands.” Tensho, like sanchin, is a form of moving meditation, combining hard dynamic tension with soft flowing hand movements, and concentrates strength in the tanden. Tensho can be considered the ju (soft) counterpart of the sanchin’s go (hard) style.

Seiunchin means attack, conquer, suppress; also referred to as “to control and pull into battle.” Seiunchin kata demonstrates the use of techniques to unbalance, throw and grapple, contains close-quartered striking, sweeps, take-downs and throws.

Shisochin means “to destroy in four directions” or “fight in four directions.” It integrates powerful linear attacks (shotei zuki) and circular movements and blocks. It was the favorite kata of Grand Master Miyagi.

Sanseiru means “36 Hands.” The kata teaches how to move around the opponent in close quarter fights and emphasizes the destruction of the opponent’s mobility by means of kanzetsu geri.

Kururunfa means “holding on long and striking suddenly.” Its techniques are based on the Chinese Praying Mantis style. Kururunfa contains a wide variety of open-hand/hip coordination techniques that, depending on the circumstances, can either be interpreted joint locks, blocks or strikes or any combination of the three.

Seisan means “13 Hands.” Seisan is thought to be one of the oldest kata that is widely practiced among other Naha-te schools. The Goju-Ryu (Naha-te) version is more complicated that contains close range fighting techniques such as short-range punches, low kicks, and directional changes to unbalance the opponent. It contains techniques performed under full tension thru the range of motion, as well as strong fast techniques. Seisan is said to complement Seiunchin.

Suparinpei means “108 Hands.” Also known as Pechurin, it is the most advanced Goju Ryu kata. Initially it had three levels to master (Go, Chu, and Jo), later Miyagi left only one, the highest, “Jo” level. This was Dai Sensei Meitoku Yagi’s specialty 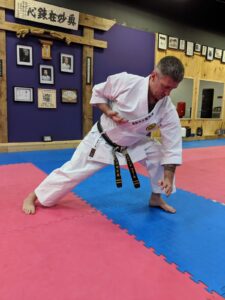 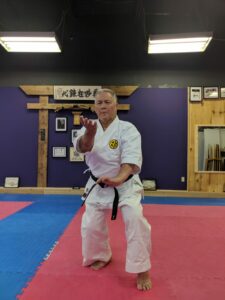 Our Tiny Tigers karate program for kids aged 4 to 7 years old is a fantastic developmental activity and huge fun for all involved!

Good health
Confidence and a positive self-image
A great group of new friends
Respect for teachers, parents and peers
Focus, discipline and energy management
Self-defense skills (which we hope they never have to use)

We love parents to support their children and enjoy watching karate lessons from our special viewing area.